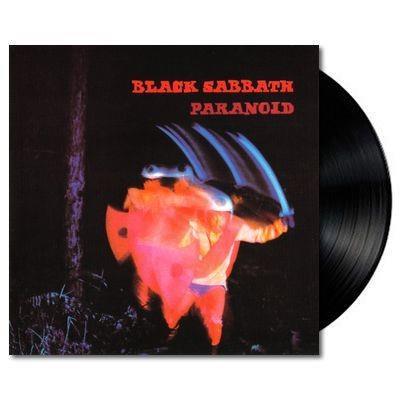 ‘Paranoid’ was the seminal sophomore studio album by Black Sabbath. First released in September 1970, it was the band’s first LP to top the UK Albums Chart, and is often regarded as one of the most quintessential and influential albums in heavy metal history.

‘Paranoid’ contains several of the band’s signature songs, including “Iron Man,” “War Pigs” and the title track, which was the band’s only Top 20 hit, reaching number 4 in the UK charts.

Black Sabbath returned to the studio with producer Roger Bain in June 1970, just four months after their debut album was released. ‘Paranoid’ crystallized the band’s writing process, with Iommi initiating the ideas with his charred riffs, Ozzy (Osbourne) working on a melody, Geezer providing drive and the majority of the lyrics, and Bill Ward locking into a set of often pounding rhythms beneath Butler’s bass rumble. Most of the songs on ‘Paranoid’ evolved during onstage improvisational jams.

‘Paranoid’s chart success allowed the band to tour the US for the first time in October 1970, which spawned the release of the album’s second single “Iron Man.”

As of 2014, ‘Paranoid’ is Black Sabbath’s best-selling album, having sold 1.6 million copies in the US since the beginning of the SoundScan era.

Unless otherwise stated postage to any Australian address is FREE for Australia Post’s standard eParcel service or Courier, and these services will include online tracking unless the order is too small to require one.

We also offer express shipping for a nominal charge – please note this does NOT guarantee next day delivery and delivery to certain regional/remote locations can take longer. Postage to non-Australian/international addresses is not available unless otherwise discussed with Record Shed via email or phone. Please contact us for more information.

Please contact us in the first instance to advise us of a request to return an item.

We will confirm the returns procedure, we will provide you with a reply paid label for the return of your order at no cost to you. Our packaging must be used when returning items to us to avoid any damage in the mail (unless the packaging was damaged in the first instance).

If you wish to return an item because you have changed your mind about your purchase, Record Shed will offer a refund provided that:

– It is in its original packaging, including instruction manuals and all accessories;

– It is unworn, unopened, unused and in its original condition;

– In the case of Vinyl Records, computer games, CDs and DVDs the original security seal or shrink wrap is intact.

– The customer will pay for all change of mind returns postage.

If these requirements are not satisfied Record Shed reserves the right not to offer a refund for change of mind returns.