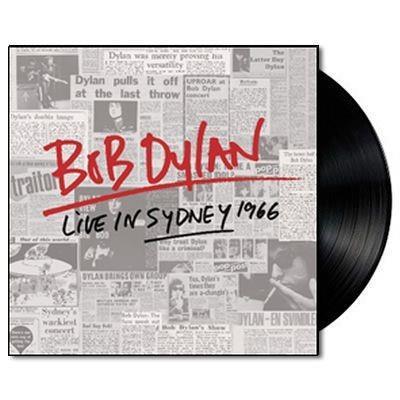 ‘Bob Dylan Live In Sydney 1966’ is the first time that Bob Dylan’s concert, recorded on April 13, 1966, and the at the Sydney Stadium, has been available as an official Bob Dylan release.

The first concert of his 1966 World Tour outside of the US, it is being released as a one-pressing only limited edition 2LP-set. The show was originally recorded by TCN9 for TV broadcast, and is one of the only recordings from the 1966 tour that still exists in its entirety, and also its audio quality.

Australia was the first major stop (outside the US) for Dylan’s legendary World Tour in 1966. The fortunate few thousand here who witnessed it saw what proved to be the watershed moment in Dylan’s career. It was the culmination of  Dylan’s evolution from folkie icon to fully-fledged rock star, which had begun with his controversial “electric” debut at the Newport Folk Festival on July 25, 1965. The punishing schedule of the 1965-66 period – three landmark albums somehow crammed in around a frantic round of tours and other engagements – took its toll on Dylan. The ’66 world tour was to be his last major concert outing for almost 8 years.

By the time he arrived in Australia, just prior to his 25th birthday, Dylan was at the height of his fame and was now, along with The Beatles, one of the most famous and popular performers in the world. Like The Beatles, his popularity, and his perceived role as a social spokesman exposed him to an unprecedented level of media and fan attention. His press conferences and interviews became a cross between an police interrogation and a boxing match, with the wry, caustic and cynical Dylan sparring with (and sometimes mauling) the journalists, who in return probed to find flaws in this new musical demigod.

His songs were taking rock music to a new level of complexity and maturity, but in doing so he had left far behind him the folk style that had made him famous. Many older fans, who took folk music very seriously, felt betrayed by Dylan’s move into what they saw as the ‘corrupt’ world of pop music. Dylan was deeply committed to his new music, and determined to present it the way he wanted – whether the press and audiences liked it or not.

Unless otherwise stated postage to any Australian address is FREE for Australia Post’s standard eParcel service or Courier, and these services will include online tracking unless the order is too small to require one.

We also offer express shipping for a nominal charge – please note this does NOT guarantee next day delivery and delivery to certain regional/remote locations can take longer. Postage to non-Australian/international addresses is not available unless otherwise discussed with Record Shed via email or phone. Please contact us for more information.

Please contact us in the first instance to advise us of a request to return an item.

We will confirm the returns procedure, we will provide you with a reply paid label for the return of your order at no cost to you. Our packaging must be used when returning items to us to avoid any damage in the mail (unless the packaging was damaged in the first instance).

If you wish to return an item because you have changed your mind about your purchase, Record Shed will offer a refund provided that:

– It is in its original packaging, including instruction manuals and all accessories;

– It is unworn, unopened, unused and in its original condition;

– In the case of Vinyl Records, computer games, CDs and DVDs the original security seal or shrink wrap is intact.

– The customer will pay for all change of mind returns postage.

If these requirements are not satisfied Record Shed reserves the right not to offer a refund for change of mind returns.